Was Jesus The Most Interesting Man In The World? 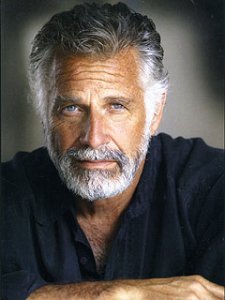 Every time he goes for a swim, dolphins appear…

The police often question him, just because they find him interesting…

His personality is so magnetic, he’s unable to carry credit cards….

People hang on his every word, even the transitions…

He could disarm you with his looks, or his hands…

His reputation is expanding faster than the universe…

He once had an awkward moment, just to see how it feels…

He lives vicariously through himself…

Who is this man? The most interesting man in the world from the Dos Equis beer commercials aired in the U.S. The ads portray this man as the embodiment of cool.

But could they also be based on Jesus?

Please join us as we discuss this in today’s daily Bible conversation.

Ephesians 5:1-33. Paul offers some practical instruction for all believers. He tells his readers to avoid being immoral, impure or greedy. The Greek word for “immoral” is pornos. That’s pretty easy to identify. But the next two aren’t often discussed. “Impure” is more a state of the heart. It involves our thoughts and intentions. I can do some very good things and remain impure inside. For example, I can give generously (a pure action) because I want people to consider me generous—and impure intention. In my experience, the last word—greedy—is rarely addressed in the church. “Greed,” however, is not akin to “wealthy.” Poor people can be just as greedy as anyone else. The Greek word, pleonexia, means “have more.” While the root meaning of a word isn’t always the same as its definition, this time it is. Greed is the constant desire for more—not just money but power, influence, stuff, anything really.

Proverbs 24:7. The gate of the city was the location where business was transacted and legal matters resolved. The wise old men often gathered near the gate to offer advise to younger men and women. That’s why the writer says that the fool has nothing to say in the assembly at the gate.

Through the years, I’ve heard various descriptions about Jesus’ appearance. I once heard a youth speaker describe him as a tall, really good looking athlete who could palm a basketball. Another speaker described him as a winner—and that when we commit to living for him, we’ll become winners too. And vice versa, when we become winners, we look most like Jesus.

Regardless, Jesus was portrayed as cool, the prototype of the most interesting man in the world.

But that doesn’t line up with Isaiah’s version of the coming messiah. Isaiah 53:2–3 tells us,

He had no beauty or majesty to attract us to him, nothing in his appearance that we should desire him. He was despised and rejected by men, a man of sorrows, and familiar with suffering. Like one from whom men hide their faces he was despised, and we esteemed him not.

The early church sang a hymn which Paul included in his description of Jesus in Philippians 2:6-11: “[Jesus] made himself nothing, taking the very nature of a servant, being made in human likeness” (verse 7).

When he came to earth, Jesus didn’t look like the messiah. He was born to peasants and spent his first hours in a food trough for animals. His father likely died while he was young and he spent his early years as a blue collar worker. He wasn’t good looking nor did he have a commanding presence. He was plain. Average. Normal. Not particularly cool. Probably couldn’t even palm a basketball. And definitely not the most interesting man in the world, at least according to the Dos Equis beer commercials.

If Jesus was cool, then he was the messiah of the athletes, winners, wealthy, good-looking, funny, and successful people. But he intentionally avoided being like them not because he didn’t love them, but because he came to earth to be the messiah for everyone.

In an age that emphasizes the importance of being successful and prosperous, Jesus offers something completely different: suffering and ridicule.

What’s my point? Jesus died for everyone, not just people with athletic prowess, business acumen, good looks, or magnetic personalities. In the same way, we don’t need to embody our culture’s definition of success in order to be pleasing in God’s sight. We don’t need to be cool and it seems to me that he doesn’t want us to portray him as cool.

He’s the messiah for everyone. For you and for me.

Tagged as "Dos Equis beer commercial", "The Most Interesting Man In The World", "Was Jesus Cool?", "What did Jesus look like?", Read through the Bible in a year