Why I Believe In Jesus (And It’s Better Than Proving The Shroud Of Turin!) 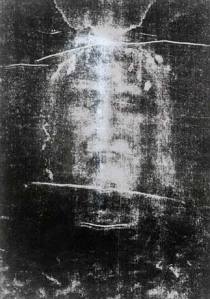 Although it’s origins and history are shrouded in mystery, the first historical acknowledgment of the Shroud of Turin dates back to 1390. Previous to that date, stories floated around medieval society that the burial cloth of Jesus existed. In fact, Byzantine emperors prior to 1204 claimed to own a burial cloth that was reputedly placed on Jesus at his burial.

Interestingly enough, seven churches in Europe claim to own the original burial cloth, although the largest following claim their devotion to the shroud in Turin, Italy—and for good reason. The following marks appear on the cloth:

On the other hand, radiocarbon analysis by a team of researchers in 1988 concluded with 95% certainty that the material in the shroud was dated between 1260-1390 AD, which, ironically (or not so ironically) coincides with the earliest historical record.

Yet, among the plethora of tests, one test was conducted on dirt particles extracted from the shroud which were identical with samples of limestone from an old Jerusalem tomb.

While the Shroud of Turin offers intriguing evidence concerning the existence of Christ, even stronger evidence exists.

Please join us in our daily Bible conversation to discover what it is.

Daniel 7:1-28. This chapter begins a series of intense visions Daniel received. Most scholars believe this vision regarding the four kingdoms was fulfilled in Daniel’s day, culminating with the Roman empire.

The Apostle John was nearing the end of his life. Many of his fellow disciples had already died and he had already written the gospel of John. As the church continued to grow, John became increasingly concerned about the prevalence of Gnostic teaching in the church. Gnosticism teaches that the spirit is entirely good and the body is entirely evil. As a result, Gnostics taught that Jesus never appeared in bodily form—he was more like ghost. Gnostics worked out this belief in two conflicting ways:

This second alternative was John’s concern in his epistle. John’s opening words about seeing and touching Jesus were mentioned to prove that Jesus is both divine and human.

Proverbs 28:23-24. “He who rebukes a man will in the end gain more favor than he who has a flattering tongue” (Proverbs 28:23). In the end, honesty in relationships trumps niceness and saying nothing at all. Telling people what they want to hear and protecting them from the painful truth isn’t love, it’s self-protection on our part. Of course, we can also beat people up with the truth, which is why it’s important to be cognizant of timing and speaking the truth in love (Ephesians 4:15).

Two thousand years after Jesus walked the earth, it’s easy to question not just the divinity of Jesus, but his existence as well. Years ago while reconstructing my faith, I searched for evidence that would prove once and for all Jesus’ existence and divinity.

During my search, I realized that if I had indisputable evidence, I would no longer need faith—and without faith, it’s impossible to please God. That doesn’t mean we shut off our brains in order to follow Christ, but it does mean that all the evidence will likely never line up in a way that provides irrefutable proof…and that’s okay.

However, 1 John 1:1–4 gives me evidence that is more compelling than the Shroud of Turin:

How could John articulate  this any more clearly? This is the Klassen paraphrase of John’s words: Believe me! I saw Jesus with my own eyes. I touched him with my own hands. And I’m telling you these words so you will believe me and enter into a relationship with God’s son Jesus Christ. I write this to you because if I don’t, I’ll explode!

As I mentioned in Insights and Explanations, John’s epistle was validated by other early church fathers within a generation of being written. Although penned 1900 years ago, evidence overwhelmingly proves that a man named John wrote an epistle we call 1 John.

That evidence by itself is fairly convincing. But consider Peter’s words in 2 Peter 1:16–18:

We did not follow cleverly invented stories when we told you about the power and coming of our Lord Jesus Christ, but we were eyewitnesses of his majesty. For he received honor and glory from God the Father when the voice came to him from the Majestic Glory, saying, “This is my Son, whom I love; with him I am well pleased.” We ourselves heard this voice that came from heaven when we were with him on the sacred mountain. (italics added)

Peter basically sends the same message as John: Don’t tell us Jesus didn’t exist and don’t tell us he was simply a good man. We are eyewitnesses to the existence of a man who was unlike any other man.

And who were Jesus’ two closest friends? John and Peter!

But last of all, why would these two men risk their lives for a lie? History tells us they existed. Peter was reputedly crucified upside-down and John was exiled to the island of Patmos because they claimed Jesus was more than a good man. They claimed he was the unique son of God who rose from the dead.

For me the evidence is more than compelling. It convinces me that two thousand years ago, a child was born in Bethlehem. He grew up in Nazareth, proved his authority as God’s son by working miracles (see Hebrews 2:3–4) and then offered himself as our sacrificial lamb by being crucified on the cross. Then he conquered death and hell by rising from the dead.