Having Trouble Seeing Life the Way God Does? Join the Crowd. 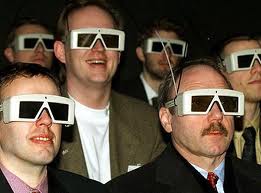 More fun than humans should be allowed to have?

Prophecy, like God, can be terribly confusing. It seems life would be much easier if we could get a better handle on God. Yet, even Daniel, after having the angel Gabriel explain the meaning of his vision, says, “I, Daniel, was exhausted and lay ill for several days. Then I got up and went about the king’s business. I was appalled by the vision; it was beyond understanding.”

Wouldn’t it be great if there were some special glasses–like 3D glasses, except they would look better on you and not be made out of cheap cardboard–that helped us understand these strange parts of Scripture, our lives, and even God better?

Daniel 8:1-27: Notice how different Daniel’s visions are from Ezekiel’s. Daniel is far less descriptive. For example, Daniel give us no real description of the ram and goat, he uses no colors, no similes. His prose is sparse and declarative. “There before me was a ram with two horns . . . and the horns were long.”

Meanwhile Ezekiel tells us in elaborate language he saw, “A figure like that of a man. From what appeared to be his waist down he was like fire [and] . . . was as bright as glowing metal.” Ezekiel’s sentences too are long and complicated.

Further, Daniel more often anchors his vision to concrete places (“beside the canal”) and mentions himself more so than does Ezekiel. This gives Ezekiel’s visions a much more other-worldly feel.

I am amazed at how comfortable God is in communicating his truth through very different and completely human vessels. Rather than strive for a safer–and possibly clearer–more uniform communication, God uses Daniel and Ezekiel’s different personalities and ways of seeing and describing the world. God does not dictate to them and overpower or invalidate them but instead lets them tell what they saw filtered through their very human eyes and words. This is remarkable because, though we may not completely understand these mysterious visions, we know that God can and will use us no matter how weird or quirky we are.

1 John 2:1-17: According to John all obedience and disobedience to God can be summed up in love. Love is an act of obedience. Lack of love is sin. We spend so much time trying to define good and bad in our lives and world. We wrestle endlessly with questions like, should I see R rated movies, drink a beer, tell a joke, or drive 5mph over the speed limit? Yet, it seems to me, John wants us to wrestle with a far harder question. Is my life a response of love to God? Are my actions ones of love?

It’s disconcerting, that Daniel himself, and those of us who follow, can’t definitively know what these God-given visions mean. Yes, there are parts we get: the four horns were the four Greek kingdoms that grew out of the one. But what does that have to do with our lives? What are we supposed to do with that information? Obviously, God wants us to see or do something differently based on his word and even these wacky visions. There always seems to be more to understand. Maybe that is why Daniel fell ill for several days. Some 3G (God Vision) glasses might help.

It seems to me, if we understood these visions, like a correctly diagnosed disease, we could better administer treatment. We could better navigate life. Yet God doesn’t seem to see it that way. So, God’s lack of clarity remains a thorn in our sides, sometimes a source of doubt. Like a person blind, we stumble; we fall; we make wrong turns.

Maybe, however, complete clarity is not the best thing either. Think about it. We are talking about how an eternal Being sees and cares for the world. His vision had better be longer, deeper, and more complicated than mine. And of course, maybe God’s point is not for us to avoid mistakes, pain, and disease at all costs. Maybe us not seeing is part of the plan. Maybe God views these tragedies–for that matter our very lives–in slightly different light than we do.

Ultimately this means God is bigger, smarter, and in all ways more than we are. Thank God for that.

One of my professors said that understanding prophecy is often like looking at a mountain range. From a distance the peaks appear stacked up against each other–one-dimensional like a paper landscape. But once you drive in among them, you see they are separated by many miles. Just the same, prophecy can both be immediate and long-term, multidimensional.

God also is not one-dimensional, a paper landscape. God is not even three-dimensional; sorry 3D glasses won’t help. God is infinitely dimensional. God can see it all, past, present, and future all at once. That truth makes God very confusing but also comforting. Unlike me, God is not held captive by time or circumstances.

I’m glad I can’t wrap my mind around God. It would be a sparse covering for him.

I don’t understand all that God is or often what God is doing. I can’t quite see it the way God does. But late at night, when my worried mind turns like a pin wheel, I’m comforted that God is powerful rather than predictable. Then I am reminded that my job is not to understand it all but like Daniel to “get up and go about the King’s business.”