Are You Living A Dog’s Life? Maybe You Should. 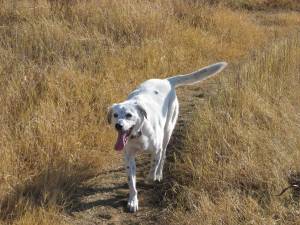 “Look, that dog is smiling,” kids would say pointing at Anastasia, our white and black spotted dog.

It was true. Her dark lips curled up in a discernible smile and her eyes sparkled whenever we took her for a walk.

“Is it a Dalmatian?”

“Nope, just a happy mutt.” Then we would follow her down the trail as she loped along with her white tail turning like a crank on one of those old “Jack in a Box” toys.

It didn’t take much to make Anastasia happy. Just being with her people. We called her the “velcro dog” because she would always stick to the closest human in the house. And if any human uttered those cataclysmic words, “Wanna go for a walk?” she would explode with happiness. Even in her last days, when she could barely walk and couldn’t see, those words gave her an unexpected burst of new life.

Anastasia’s priorities were simple: people, going for walks, and food. In that order too.

Maybe we got the phrase “It’s a dog’s life” from dogs like Anastasia.

Over the 14 years Anastasia was part of our family, I learned a lot from her.

Anastasia taught me companionship is crucial. As much as she liked to go for walks, she never did so without one of us, even if we left the front door wide open. But grab that red braided leash and watch out.

How much of our human unhappiness comes from our dependence on rugged individualism? I believe there is a correlation between the modern proliferation of emotional and psychological problems and our self-imposed isolation. One of the main symptoms of depression is a feeling of isolation which then drives the depressed person into deeper isolation.

Humans, like dogs, are pack animals. Some more so than others. But we, like Anastasia, would shrivel up and die if left completely alone.

She also showed me a good, natural smile breaks down walls. Even grumpy, scardy-cat, non-dog-lovers would stop and comment on Anastasia’s smile. Many would even bend down and pet her. Funny how we humans think a fancy car, or the right deodorant, or a pile of money, or lots of educational degrees, or whatever will make us attractive and important.

They don’t! But a smile can. Is that because a smile is a gift to others we can’t see unless we are looking self-centeredly in a mirror?

Like I said, people, walks, food. Toss a good nap in there and she was done for the day. My life? You gotta be kidding me. I have to consult my “to do list” just to get out the door.

“Let’s see, I have my wallet, is there any money in it? My keys, my iPhone, which, of course, contains my iCal calendar and my Google Map to get me where I’m going.”

Have you ever heard of a dog searching for his key to the storage locker where he keeps all his stuff he hasn’t used or touched in two years?

The things that are truly important in our lives are few. Maybe as few as people, walks, and food.

Anastasia didn’t think more of herself than she should.

Comedian Brian Regan does a hilarious routine called “I Walked on the Moon” that makes fun of our human tendency to one-up each other in personal story-telling (see the embedded video). Regan points out we seem convinced that lifting ourselves above others while putting others down, will actually make us feel better about ourselves.

Anastasia had no such delusions. If ever, while she was running down the trail, she saw another dog approaching, Anastasia would stop, lay down, and assume a submissive stance. She was not an Alpha Dog. And it served her well. The other dog would approach and stand over her. Thus, Anastasia got in few, if any dog fights. Soon the two dogs would be smelling each other (I don’t recommend this for humans) and then bounce off playing and exploring until us humans hurried them along our way.

How many of our fights come not from real disagreements but from wanting to be the Alpha Dog, standing above others? Too many of mine do.

In my opinion, a willing, vulnerable submissiveness is crucial to a growing spiritual life.

In relationship to God no one I know is the Alpha Dog.

James, the brother of Jesus, wrote this same advice to some of his friends telling them, “Humble yourselves before the Lord, and he will lift you up.” Whether you believe in God or not, there is a truth here. Pride, putting ourselves above others, often lands us in the bottom of the pile, while humility often lifts us up.

Funny the best thing about Anastasia is she seemed to know herself and her place: with her people on the trail smiling at all life brought her. Maybe living a dog’s life isn’t a bad idea.

Eugene C. Scott, co-pastor at The Neighborhood Church, misses Anastasia. It has been a year since Anastasia passed away. But along with the lessons she taught, he still finds stray white hair clinging to the couch. He’d love to hear of lessons you’ve learned from your pets.