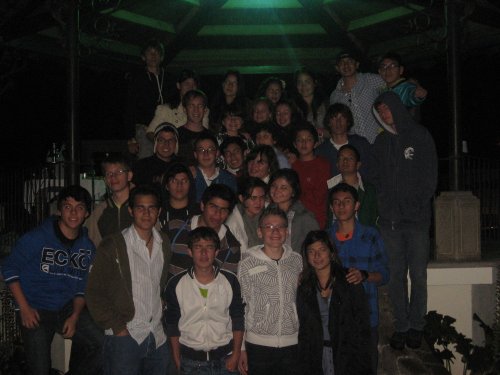 This past year while teaching in Guatemala, I had my creative writing class read through a chapter from Anne Lamott’s book called Bird by Bird.  The chapter, Shitty First Drafts, details the importance of just writing, even if it is bad at first.  My goal was to help my students understand that it is okay to mess up with their writing, and with their lives, because you can always go back and edit.  And while you cannot change your past, Christ’s forgiveness acts as the editor’s pen for our lives.

Anne Lamott believes that writers need not try for perfection because it only leads to failure.  First drafts are meant to be bad.  The first time we do something it might not be that great, and in her words even a little “shitty;” it’s okay, because at least we are getting words down on the page.  And when we type those words onto the page, it shows we are trying and when we try we grow as writers.

I believe that this principle is true in life as well.  Our attempts at life can sometimes be considered grand failures.  When I was young I loved to draw, but no one would consider my drawings art, well maybe Picasso fans.  I expected too much.  I didn’t allow for correction.  When I was a little older, I stopped drawing because I was afraid of the results.

But if we live in fear we cease to live.  If we are too afraid to dream grand dreams, then we live empty lives.  And an empty life is meaningless.  Donald Miller, another one of my favorite authors, believes that a meaningful life is like a good story.  He says, “A character who wants something and overcomes conflict to get it is the basic structure of a good story.”  So, I set out a new goal.  I am not going to live my life with fear.  Conflict and strife will happen and when I overcome that antagonism, I will have lived an element of a good story.  But first I cannot be afraid to struggle.

I was telling this to my Spanish teacher during one of my lessons last year at the same time I was teaching this concept to my students.  The rain was pounding on the roof of the little coffee shop we’d met at and she was telling me how she is scared of walking in the rain.  And how she always is afraid for me when I walk at night.  (Now a quick side note here, this was all in Spanish.)  The Spanish word for fear is miedo.  Not to be confused with the Spanish word for shit, which is mierda.  So as she was saying how she was afraid of walking in the rain, I decided to say I don’t live my life with fear.  But I said, “Yo no vivo con mierda.”

Shocked, my Spanish teacher told me to be quiet.  Clueless, I repeated mierda a couple of times thinking I was correctly saying the word for fear.  But the look on her face told me this was not so.  Instantly I realized what I had said, and busted up laughing.  I’d said, I don’t live my life with shit.  Which, might be true, because most of the time I am too scared to mess up.  Yet, I mess up with my Spanish all of the time.  And when I do, I learn.  I now know the difference between miedo and mierda.

What am I getting at here?  I believe I need to start living my life con mierda.  I need to be more willing to mess up.  Like Anne Lamott says, just get the words on paper.  Just say the wrong thing.  ‘Cause with the grace of God, I can set out each new day with a blank page.  I must go out and capture my dreams.  It may be messy at first, but as I go along, my shitty first drafts of a life will turn into pretty damn good stories.  And a meaningful life is filled with good stories.  And good stories have mess ups along the way.

Brendan Scott has spent the last three years teaching in a missionary school in Guatemala where he tried to become fluent in Spanish, but instead bonded with his students in a way that God is hopefully still using him in their lives.  He is now living in Denver and looking for jobs.  He hopes to return to school so that he can pursue his masters of fine arts in creative writing. Read more by Brendan Scott at guatspot.wordpress.com.