In-N-Out: My Weekend In San Diego 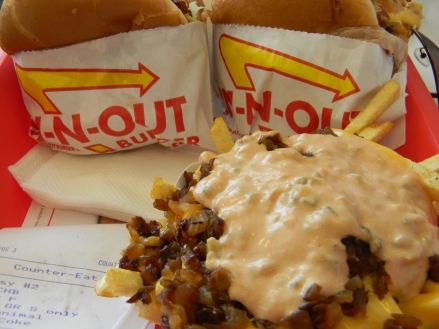 On June 30th I experienced the best fast food burger I’d ever eaten.  I went to In-N-Out Burger for the first time.  It was as good as advertised and well worth the 28 year wait.  Plus, eating at the burger joint, which has a much deserved cult like following, capped off an extremely great weekend.

The day before, I stumbled out of bed in Colorado, a perfect state to live in, save for the lack of In-N-Out Burgers, and boarded a plane at an unhealthy hour of 6:00-am for San Diego. 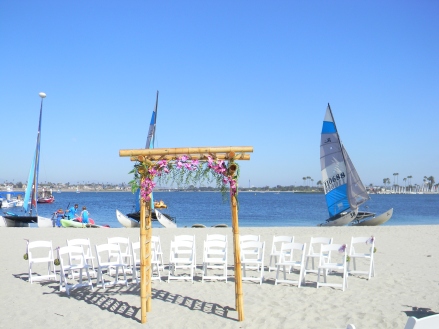 The real reason for my early flight was a wedding.  My good friend RJ was to be married on the beach behind the Catamaran Resort.  RJ and I were in a men’s life group in college called Rootz (The spelling is still being argued over).  Over the years our friendship deepened over our love of sports (I have to constantly forgive him for being a Patriots fan) and adventures.  Our friendship grew stronger when I moved to Guatemala.

No, RJ didn’t ever visit, he was too busy trying to find his life’s calling here in the states, and I don’t blame him, because if he hadn’t, he never would have met his future wife.  No, RJ was one of the few from Rootz who stayed in contact with me while I was in Guatemala.  His commitment to the friendship meant a ton to me, and so when I received the invitation to his wedding in the mail, I knew I needed to be there. 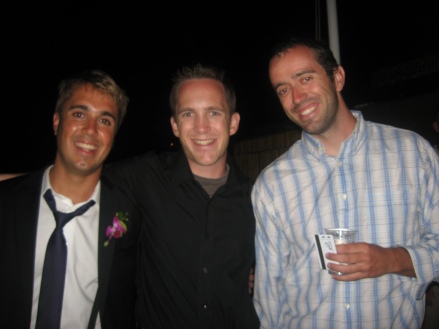 His wedding was at 3-pm on Friday, June 29th, the same day as my early flight.  I would’ve loved to have spent more time in San Diego, but on my meager budget I could only afford one night.  I boarded my plane in hot Colorado, leaving the horrible forest fires behind, and half a morning later I walked out of the San Diego Airport.  The clear blue sky and 70 degree temperature instantly made me love the city.

Around 2-pm I started making my way to the Catamaran Hotel with my friend Rob.  We’d decided to walk over to the wedding, only a three mile walk, which is nothing when the sky is clear blue sky and cool breeze comforts you along the way.  Walking is also a plus because Rob found a 20 dollar bill along the way.  My discovery wasn’t as cool, but when I saw that one of the wedding guests was wearing sandals I was ecstatic!  Without hesitation I peeled off my hot dress shoes and slid on my sandals. 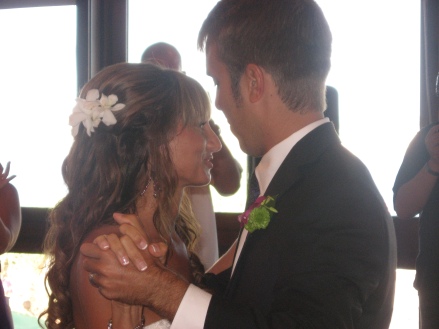 The wedding was beautiful.  RJ and his wife, Andrea, couldn’t have asked for a better day.  Andrea was gorgeous and RJ looked stellar.  But I think the wedding could’ve been in bland Wichita (my apologies go out to Marinés, my only friend who lives in the little Kansas town) and I still would have been thrilled to be there.  Yes, it was a blast to dance the night away, to take a ferry across Mission Bay at midnight, but nothing compared to being there for my friend. 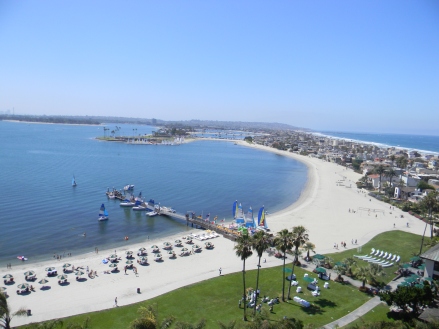 I wanted to be at the wedding to let RJ know I supported him and Andrea and that I would be praying for them as they took the next step in their lives.

I haven’t been able to attend all of the weddings that I’ve been invited to, but as I danced, ate, and spent a little time talking to RJ, I knew this was the best way I could say thank you for being my friend. 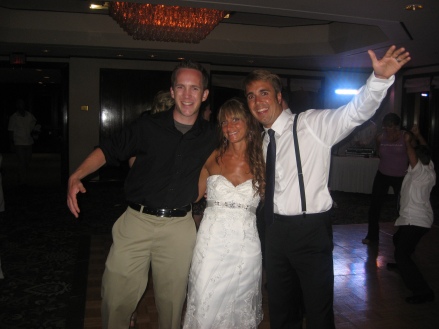 I believe strongly in staying connected with people.  Sometimes it takes only a phone call and sometimes it takes a plane ride.  I guess that’s why I went to the wedding, but it’s also why I went to In-N-Out Burger.  The day after the wedding, after a great breakfast with RJ and Andrea, I met up with another friend who lives in San Diego.   Kasey and I had worked together in Guatemala.  We hadn’t talked in almost a year, since we’d both moved back, but as we ate, our friendship felt instantly renewed. 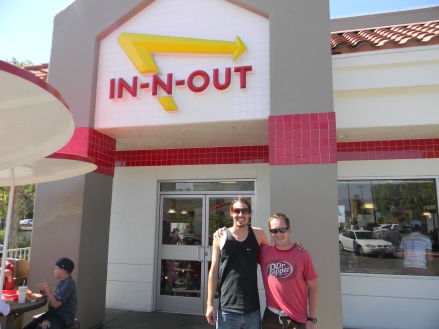 Maybe that’s what having a Dr Pepper, animal style french fries, and a burger with special sauce will do.  Or maybe that’s what happens when you reach out to your friends.  After we ate our burgers Kasey drove me back to the airport.  I was exhausted.  My trip to San Diego truly had been in and out, but even though it was so quick, it was very much worth it.

For me, even a quick trip is worth reconnecting with friends and showing them that you care about them.  I mean if we didn’t have friends and family, who would we love and be loved by?  Or more importantly who would take us to In-N-Out Burger?

The Colorado Wildfires: “I’ve seen it raining’ fire in the skies.” 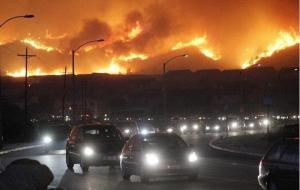 On the night of June 16, 1965 a police sedan drove down our flooded street, blaring a warning over a loudspeaker telling us to prepare to evacuate. At eight or nine years-old it seemed exciting. But my parents were stern and worried. The street in front of our house looked like a small river. And Bear Creek, a couple of hundred yards behind our house, carried a 12-20 foot crest coming down out of the mountains. We huddled in our living room with our most precious belongings in suitcases and stuffed in pillow cases waiting to evacuate.

From June 12 on, rain had been drenching areas of the Front Range, what we call the eastern slope of the Rockies. We had received as much as 12 inches of rain in one night. Earlier in the evening my dad, my sister, my brother, and I had driven to Ruby Hill (we sledded there in the winter) on the southwest side of Denver and watched the South Platte swell from a small river into what seemed like a raging ocean, growing to over a half mile wide. 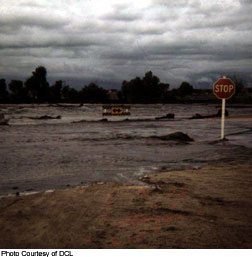 We stood in awe, drenched by the continual rain, watching ravaged trailer homes, massive trees, and barges of debris rush down stream. This debris then caught on the bridges and eventually pushed them over into the river. Its power was unstoppable. Most of the bridges on the south side of town connecting west to east were taken out. At one point a police car, its red light flashing feebly in the gray night, raced down a road near the river as the road collapsed behind his car. We watched him as he drove out of sight hoping he could keep ahead of the river.

We were fortunate. Bear Creek never reached our house and I woke on the living room couch in the morning. The flood was abating and now all those who were not so fortunate began picking up the pieces.

That night came back to me as wildfires ravaged the Front Range these past few weeks. Thank God, we have had no fires near us, though we know people who lost their homes. And we keep all those suffering tragic loss in our prayers.

We do, however, live in what some call a “Red Zone”, an area where a wild-fire is likely.

“Not if there will be another fire, but when,” they say.

Back in 1965 I packed my piggy bank that looked like a miniature safe and my Spiderman comics. I guess I thought those were my most precious possessions. Today I can only see them in my memory.

What would you save?

When it’s rainin’ fire in the sky, you ask what’s most important?

Today I would make sure my own family was safe. Then . . .

I have heard several people who lost their homes in the Waldo Canyon Fire say things like, “As long as we are safe.” Or “We can rebuild.” “It can all be replaced.”

I only hope I can be that mature and calm if the day comes.

But the truth is, though Jesus rightly warns us against “storing up treasures here on earth,” the things that have traveled life with us–books, pictures, keepsakes, a home against the storm, the place we spent Christmas and Saturdays working together in the yard–have gathered meaning like moss on the north side of our lives. Their loss is not monetary only. Our things often represent a connection to the past, present, and future. And that connection is often to people–and even sometimes–to God. Losing the small wooden cross I have had since June of 1972 would be like the God chapter being ripped from my story. Maybe Jesus is asking us to ask about the eternal value of the things around us.

Things count. But for what? 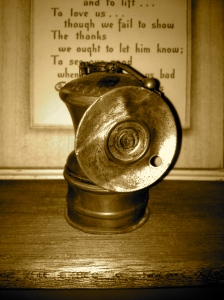 As I look around my house for what I would save in an emergency, I see my father’s miners’ lamp (possibly handed down from my grandfather) sitting useless on my bookshelf. What I really want from it is a piece of my dad. I would love to know the story behind it. His story.

Maybe then the best thing to do in these times is not gather things but stories. Talk to each other more. Turn off Facebook, the TV, and ask, “Tell me all about your life. And don’t leave out a single minute.” Then listen. Because pictures will not fill the void. And too often things are not all we lose when we see it “rainin‘ fire in the sky.”

Eugene C. Scott has too much stuff and would like to get rid of some of it. He is also trying to see God in daily life, even in tragedy. Join him in The Year of Living Spiritually. You can join the Living Spiritually community by following that blog and clicking here and liking the page. He is also co-pastor of The Neighborhood Church.