God Is Not Silent, Even On September 11

Editor’s note: In a desire to remember and honor those murdered on 9/11, I am departing from our format slightly today. I wrote this in the days following the 9/11 attack. It was first published in the Vail Daily. I have made only minor grammatical changes. Eugene

Daily the sound of children chattering, laughing, whooping and shouting wafts, soothing and constant like waves breaking on the beach, through my open windows. There is a grade school directly behind my house and each fall weekday, at about 8:45a.m., the delightful laughing and squealing and playing commences. Occasionally I’ll take breaks from my study to watch the children from the deck. Looking down into the playground these disembodied voices suddenly connect with children on swings, or playing soccer, or chase, or simply sitting against the wall talking. Their sporadic movements and spontaneous smiles dance in the fall air like sunlight on choppy water. Back in my study again, each wave of laughter reminds me life is as it should be and that I’m not alone.

Today however, all is not as it should be and it sounds as if I am very much alone. Today is Tuesday, September 11, 2001 and the waves of innocent noise from the playground have stopped rolling because several thousand miles away an unthinkable evil has struck our nation. Behind my house stunned silence reigns. On this day the children are being kept inside for very good reasons: fear, respect, confusion, safety. I too wallow in stunned silence unable to concentrate on my work.

I sit and wonder, is God silent too? Why does it seem God is so quiet when evil speaks? For the next couple of hours these questions pound me along with the horrific images from the television. God, why are you so silent?

Thankfully the phone rings and calls me away to help with emergency prayer services in one of the chapels I serve. The chapel fills with people of all denominations and faiths twice that day. We weep and pray together quietly. Slowly through our prayers and tears, I hear a profound sound.  God too is quietly weeping. I realize the silence of the children in the school behind my house was deeper than a silence of safety or fear. It was a silence of mourning. I am reminded of Jesus response to the death of his friend Lazarus: “Jesus wept.”

Why did I, do we, assume that God condones evil simply because God allows it to continue for a time? Does God’s silence really imply He is sitting in heaven nodding and muttering, “It’s about time those sinful humans suffered. It’s just what they deserve”? God forbid! Yes, we all have sinned. But God doesn’t silently and angrily throw airplanes into tall towers full of His children to punish them anymore than loving parents sneak up behind their children and beat their bottoms with no warning or explanation. No, God does not laugh at or ignore our pain. He mourns.

I know this because God was silent at another horrific time in history. The world went dark for three hours while Jesus hung on the cross (Luke 23:44-46). God mourned as He turned away from the sins of the world–including those of September 11–tainting the heart of Jesus Christ.

On September 11 God was not silent or inactive after all. If we look and listen, this becomes obvious. Since September 11 courage, kindness, love and mercy poured from the hearts of people in the United States and around the world. For example, some of the passengers on the Pennsylvania plane forced it to crash so as to save those in its intended target. And our little Interfaith Chapels raised $20,000 for disaster relief. A Girl Scout troop in Denver made red, white and blue ribbons and a local radio station gave them away for donations, raising several hundred thousand dollars. A friend of mine told me she broke down in tears in the parking lot of the post office. A stranger on crutches hobbled over and comforted her with a long hug.

For me the final piece of evidence that God was not silent came when I stopped in at the hospital to visit a woman from our congregation who had, on September 13, given birth to a son. I trembled at what I might say to her. How would she feel bringing a son into such a world? Would she be depressed? And how could I comfort her? She beamed as I walked in, the first true smile I had seen since Monday.

“Isn’t he beautiful?” she said pointing to her son.

Looking at that dark-haired miracle, I thought, Oh, how could I be so ignorant? Evil and hate can temporarily take life. But only God and love can create life. God is not silent! The quiet mourning of God is not a powerless shrug of the shoulders. He was not silent on September 11 nor was he silent when Christ died on the cross. In both cases God quietly takes death and turns it to eternal life.

“It is finished,” Jesus said from the cross. What is finished? The ability of evil to prevail. Win some major and devastating battles? Yes. But God’s love will prevail because only God can turn death and devastation to love and life. God is not silent. Jesus Christ shouted mercy, power, forgiveness and victory from the empty tomb. And he still shouts it today. No. God is not silent or inactive. If we listen, we can still hear Jesus whisper from the cross “Father, forgive them for they do not know what they are doing.”  And if we allow it, He will speak and act through our love and kindness to one another.

Eugene co-pastors The Neighborhood Church in Littleton, CO. If you’ve found A Daily Bible Conversation helpful, share it with your friends. Forward your daily email or send them a link to the website: www.bibleconversation.com.

Is Homosexuality the Unforgivable Sin? (Warning: You May Not Like this Blog Entry) 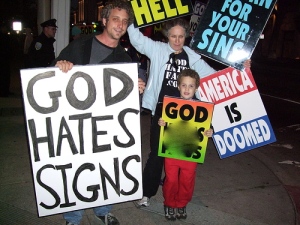 A small group of people in Topeka, Kansas have become infamous for their hate of homosexuals. They call themselves a church but consist mainly of the members of the founder’s family (I am torn here between naming the offenders to expose them and not naming them so as to not give them more publicity. I chose the latter.) These misguided, twisted sinners* travel the country and protest all things homosexual by holding up signs reading, “God Hates Fags,” and screaming vile slogans.

Romans 1:18-32 is one of the biblical passages they use to justify their hate. After reading  it myself, I wonder: if they feel these verses give them permission to protest homosexuality, why don’t they also attend church prayer meetings with signs reading, “God Hates Gossips,” or protest outside of their own meeting hall with signs saying, “God Hates Slanderers,” and “God Hates the Heartless and the Senseless”?

If I haven’t made you too angry or nervous, read on and ask with me, “Is homosexuality the unforgivable sin?”

(*Note: I too am a misguided, twisted sinner in need of God’s undeserving mercy.)

1 Chronicles 15:1-16:36: When we last saw David, he was angry with God over (1 Chron. 14:11) the death of Uzzah. It seems David has reconsidered and has actually asked God about the ark and it’s treatment. David shows once again he is a “man after God’s own heart” by repenting of his actions and learning from his mistakes. Yet he still exhibits very human behavior in that he seems to blame the  Levites for “not bringing it up the first time.” I wonder if this is the first time the phrase “ignorance of the Law is no excuse.”

Still with me? I hope so.

“Hate” is a strong word and in humans an even stronger emotion. The word “hate” occurs about 128 times in the English Bible, and only a dozen or so times in reference to God hating (The word “love” crops up nearly 700 times). And most often “hate” doesn’t describe an emotion but rather an enemy. The sense is that God generally “hates” things that are destructive to us humans, but not an emotion God feels toward humans. God views them as our enemies. The list of destructive actions God hates includes “robbery and iniquity,” “wrong doing,” “violence,” “idol worship,” and “religious feasts.”   Proverb 6:16-19 says,

“There are six things the Lord hates,
seven that are detestable to him:

a heart that devises wicked schemes,
feet that are quick to rush into evil,

a false witness who pours out lies
and a man who stirs up dissension among brothers.”

In short, because God loves us so much, God hates sin, which means any minor or major human action that hurts or destroys us spiritually, emotionally, intellectually, socially, or physically. We could spend 24/7 protesting such things and not exhaust the list.

And God seems to hate all of this self–and others–destructive behavior equally. No one enemy to humanity rises above the other.

Jesus equates anger with murder and declares calling someone a fool an eternally punishable offense (Mtt. 5:22). This confuses us because, to us, there are obviously sins worse than others. But Jesus is simply pointing out that anger eventually kills a relationship and possibly even a life, though in a less drastic way than murder. The destruction of the relationship and life are what seem to matter to God not the severity of the destruction. The earth-bound consequences differ, but both kill.

God views homosexuality and idol worship through the same loving eyes. To God worshiping a tree, money, success, or a god that does not exist is as “unnatural” (something we were not created to do) and soul-destroying as is misuse of the great gift of our sexuality. One is a fatal misunderstanding of who God is and the other a misunderstanding of who we are. Both may be love misapplied.

Is homosexuality an unforgivable sin? Some seem to act so. But Scripture, and God’s nature, belie that view.