Living Spiritually as an Art: Counting on God 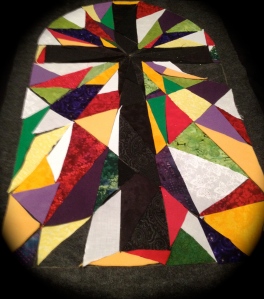 True epiphanies are rare. I’m not talking about instants of sudden inspiration or “aha moments.” Those are rare enough.

I’m talking about those times that the dictionary describes as “a manifestation of a divine or supernatural being,” those scarce times when God breaks through.

My first epiphany of the sacred kind came in 1972. It came like a meteor knocking me out of a degenerating orbit and into the path of redemption. As Phil Keaggy sang back then, God’s “love broke through.” That meteor saved my life.

I can count the other meteors on one hand.

But are those life shattering moments the only times we can count God’s presence? As if living spiritually is all mountain tops and glowing sunsets. 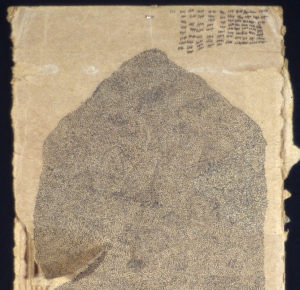 The late Guy Chase didn’t think so. Chase, a renowned artist, carried a piece of shirt cardboard and an India ink pen in his back pocket and every time he sensed God’s presence he yanked out the pen and placed a dot on the cardboard. He finally considered the strange piece of art finished after he had recorded 40,000 mini-epiphanies.

In the course of 2012 being the Year of Living Spiritually, I’ve tried similar experiments to heighten my ability to see God in the ordinary.

Living Spiritually is an Art

What I’ve come to realize, besides how difficult it is to intentionally see God in daily life, is that living spiritually is more of an art than it is a science. Guy Chase seemed to know that. While I try to record my encounters with God in words and pictures (which are also art) and ideas, Chase counted them in artistic dots that, when taken as a whole, look to me like a doorway into some unknown and adventurous place. Chase’s art calls me into a new daily adventure of seeking God.

Chase’s art has also shown me that artistically representing something mysterious, such as an encounter with God, can often better capture those encounters rather than trying to define them precisely. Seeing living spiritually as an art gives God room to move and show up in my life. Not that we should’t try to articulate and define our experiences with God. It’s simply that God is more than we can count.

Still I try. But I find I can’t count 40,000 of anything much less 40,000 times I’ve felt God present. In reality, even that number would pale to the truth of God’s omnipresence. There is not a cardboard big enough to record God’s continual caress of our lives.

As I scan Chase’s dots, I can only imagine how alive Guy Chase must have been during his art project. How he must have grown and changed, knowing he was never alone. And I realize how I long to hear just one or two of the things Chase saw and learned as he marked dots on his cardboard. How I yearn to live with such intensity and awareness.

Yet, as day 135 of the Year of Living Spiritually opens, I have noticed a laxness in my counting God’s presence. My daily journal entries have shortened, as has my God-attention span.

Chase must have grown tired too. But the final truth in his untitled, and now lost work of art, is that God does not grow tired of investing every molecule of life with his presence. You can count on that.

Eugene C. Scott can count to ten without using his fingers. Beyond that?  He is also very honored to count you as a reader and would love to hear about how you count God’s presence in your life. You can join the Living Spiritually community by following that blog and clicking here and liking the page. He is also co-pastor of The Neighborhood Church.

Lent: Is Your Life a Feast or Famine?

Several months after God first grabbed me by the heart (I was fifteen years old), I attended an Easter sunrise service at Red Rocks Amphitheater in the foothills west of Denver. Suddenly colored eggs, chocolate bunnies, and new Easter outfits paled as symbols of a holiday that affirms the resurrection and forgiving power of Jesus Christ. I remember–still–how guilt and shame, self hate and fear slid off my heart like a winter crust slides off a blade of spring grass. With Jesus living in me, my life switched from an old, grainy, black and white movie to full living color. Everything–sight, sound, joy, pain–reverberated with an edge, a flavor, that jolted me. As a musician who was popular back then, Phil Keaggy, sings, I felt

how real it seemed,

Until Your love broke through

I was lost in a fantasy

Until Your love broke through.”

That Easter in 1973 I realized the reality of God’s love breaking into my life and beginning a revolution. Freedom reigned. My heart danced as my life became a whirlwind of much-needed change. Tragically, my list of sins to abandon was quite impressive for a mere fifteen-year-old, especially since I abandoned the same sins multiple times. Slowly my struggle against sin transformed my Christian life from a joyous explosion of forgiveness into a smoldering list of forbidden actions I never fully managed to avoid. Christianity lost its life and became an oppressive duty.

Don’t get me wrong. The Bible clearly communicates that sin makes us incompatible with God and the banquet he has planned for us. Drug abuse, lying, gossip, skipping school, and the like were good things to give up. But when Christianity degenerates into a constant striving against life, it loses its power for life. My freedom in Christ was swallowed by guilt and fear and dos and don’ts.

There’s a story about a Presbyterian who moved into a Catholic neighborhood. Each Friday he grilled himself a steak. His neighbors were sorely tempted as they dined on their traditional fish. Soon the Catholics took matters into their own hands and converted the Presbyterian to their flavor of Christianity. That following Sunday the Priest sprinkled water on the man saying, “You were born a Presbyterian, raised a Presbyterian, but now you are a Catholic.” His neighbors welcomed him into the fold warmly.

But that next Friday they were drawn to the new convert’s deck by the aroma of a tantalizing steak. As they stepped onto his deck, they saw him sprinkling a slab of meat with A1 saying, “You were born a cow, raised a cow, but now you are a fish.”

That joke betrays an all too common belief among Christians–Presbyterian, Catholic, Independent, whatever–that Christianity is comprised of rites, rituals, traditions, and laws. Therefore our faith becomes that which Jesus died to save it from: outward expressions of inward emptiness: legalism. 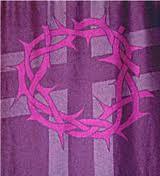 Next week millions of Christians worldwide will begin looking toward Easter and remembering the resurrection of Jesus by participating in the season of Lent.  Unfortunately, as beautiful and meaningful as Lent can be, for many it teeters on becoming the modern poster child for an empty legalistic faith. On Ash Wednesday thousands will begin a fast in which they will give up chocolate, soda, TV, or something similar.

The prophet Samuel confronted Israel’s first king, Saul, with these words: “To obey is better than sacrifice.”

What’s the difference between obedience and sacrifice? Obedience stipulates an inward desire to do what God has commanded not outward acquiescence. Jesus said, if we love him we will obey his words. Obedience is a response of love to God’s love. Further, obedience is taking God’s word in and then living it out. Jesus illustrated this with the story of a house that has been swept clean of its demons. But then, because the house remained empty, many more demons rushed back in. Obedience then is an outward expression of an inward fullness. Sacrifice often is an outward expression of an inward emptiness.

Fasting has its purpose: to remind us of our need for God. But be honest. Did giving up sweets last Lent really fill you with a deeper love for our Savior? My daughter once wondered why we don’t instead add something to our lives during Lent. In other words, embrace–take in–the good things God has for each of us. And if you choose to fast, give something up, that is not healthy for you, replace it with something that is. This Easter add the fullness of the Holy Spirit to your life. Instead of fasting, feast. Dine on the simple presence of God. Read the Bible to know God not just to wrest his will from its pages. Give yourself to God in worship. Be with God.

The Apostle Paul said the harvest of the Spirit is love, joy, peace, patience, kindness, goodness, faithfulness, gentleness, and self-control. He did not intend this as a legalistic list, but an illustration of a life with the Holy Spirit permeating the soil of the soul. Like a crop in rich earth, the fruit of the Spirit thrives in a life filled with God. Fruit withers when disconnected from the branch. If your faith is a series of outward responses based on an inward emptiness, hanging fruit on yourself will only weigh you down.

During worship we will explore those things of God we can embrace and add to our lives as a response of love to Jesus.  These worship gatherings will also include hands-on opportunities to practice these things God asks us to add to our lives.  Join us.  See tnc3.org for worship times.

Eugene C. Scott writes the Wednesday Neighborhood Cafe blog.  If you’re reading this on Facebook and you’d like to join the conversation, click here. www.bibleconversation.com. Eugene co-pastors The Neighborhood Church in Littleton, CO

Tagged as change, Christian, conversation, Easter, fear, forgiveness, freedom, God, healing, hope, How can you make Lent a feast rather than a famine, Jesus, legalism, Lent, life, love, New Life, Phil Keaggy, Read through the Bible in a year, reading through the Bible in a year, Red Rocks Amphitheater Easter Sunrise Service, sin, The Cross, transformation, truth, worship, Your Love Broke Through