What would you do if the the world as you know it ended?

In “I Am Legend” Will Smith, playing Dr. Robert Neville, shortly after his world ends, sets up a science lab to reverse the effects of a world destroying disease. In “The Book of Eli” Eli, Denzel Washington, wakes to a demolished world and spends the next thirty years journeying west while protecting the world’s last remaining Bible.

These stories are not as far fetched as they first appear. The world as we know it has ended multiple times.

Worlds collapse in many ways too, not just in apocalyptic, cinematic ways. What would you do or have you done when the world as you know it ended?

Ezra 3:1-4:25: Change is hard. Ezra takes his people back from exile to a ruble pile that once was Jerusalem. They begin rebuilding. At one point, they lay the foundation for a new temple, bigger and grander than even Solomon’s. “But many of the older priests and Levites and family heads, who had seen the former temple, wept aloud when they saw the foundation of this temple being laid, while many others shouted for joy,” reports Ezra. Despite the fact that Jerusalem and the temple are being rebuilt, some people mourn rather than celebrate because their minds and hearts still reside in the past: on what they once had, what God once did.

Yet, God never rests. God never looks back. God is always dragging us into his future. Unfortunately, when we face these inevitable changes, we just as inevitably look back grasping and weeping for what we had and possibly missing what God plans for us. 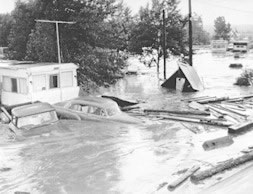 In June of 1965 my family and I stood atop Ruby Hill, a high spot in southwest Denver, and watched the South Platte River sweep cars, mobile homes, trees, bridges, people’s lives, and eventually, a mile wide swath of Denver away. A police car sped down the street below us, lights flashing against the driving rain, as the road collapsed into the raging river behind him. A fifteen to twenty-five foot crest was on its way and every river or creek in the Denver area was in flood stage.

Stunned, we rushed home and prepared to evacuate. We lived just a quarter of a mile north of Bear Creek. Our street was already filled with water. I remember collecting my favorite things–a small metal safe–and sitting in our living room waiting for the word to evacuate. I thought the world as I knew it was about to end.

I still wonder why I so valued the little safe and how I actually intended to use it to rebuild my world. Fortunately I never had to find out. The flood subsided and our house was safe.

For Ezra’s portion of the people of Israel, the world as they knew it had ended. A flood of God’s wrath against them carried them from the promised land, their holy city, Jerusalem, and, seemingly, God himself. But what do they do in this apocalyptic world when the clouds break and they return to Jerusalem and begin to rebuild their broken world?

In the aftermath of the Denver flood, the city first rebuilt bridges, roads, the two power plants, houses, and began talk of building dams. This makes sense.

Why is it then that Ezra and the priests first rebuild the “altar of the God of Israel to offer sacrifices on it”?

Because they understood that at our core humans were created to be in a worshiping, loving, dependent relationship with God. This is not to say they did not erect shelters and rebuild more “practical” things. They did.

Still Ezra seems to know that in order for his people to survive, they must put God–and community worship of God–first. Ezra’s building plan is a direct and practical response to the first commandment: “You shall have no other gods before me,” not even your own safety and comfort. But it is also a shrewd realization of how the world as God knows it really works.

The world as we know it can come to an end in many ways: divorce, cancer, loss of work, loved ones, even flood and national disaster. But physically and materially rebuilding our lives after the world as we know it has ended without first letting God rebuild our souls leaves us empty shells and ready for another collapse.

It’s a good thing God called Ezra rather than me to rebuild Israel’s world. I’m not sure my little metal safe would have been much help.

Tagged as Bible, change, Christian, conversation, death, Denzel Washington, DISASTER. The end of the world, earthquake, faith, fear, flood, hope, I Am Legand, Jesus, narrative, pain, prayer, R.E.M., reading through the Bible in a year, The Book of Eli, Will Smith